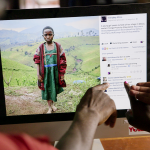 STOP FILMING US will be released online on April 2nd 2020

STOP FILMING US by Joris Postema won last Wednesday the Dutch Movies Matter Award. It is now not possible to see the movie in the movie theaters. It is a bit ironic to win this great prize with a film about imaging and perspective without in being seen. That is why we have decided to release the film online.

The film will be shown on Picl and Vitamin Cineville on April 2nd!

Pathé Thuis and other video on demand providers will follow soon after.