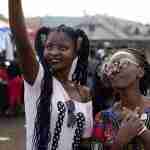 Stop Filming Us available on Netflix worldwide (excluding The Netherlands)

Since the national and international release of Stop Filming Us last year (2021), the film has been screened on festivals, at organizations and in theatre’s worldwide. Such as the events at the Africa Museum, Maastricht University , the Irish organization Comhlámh and Film Forum New York. Insightful webinars and discussions have taken place with viewers and guests all over the world. The film was part of the first Docs for Sale (IDFA) selection and the Netherlands Film Festival educational program and won the Dutch Movies Matter Award at the Movies that Matter Festival.

From today our feature length documentary, directed by Joris Postema, is available on the ‘big-N’.