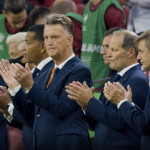 The film portrays one of the best soccer coaches our country has ever known and the man about whom everyone has an opinion. Director Geertjan Lassche followed Louis van Gaal over the past three years and conducted many interviews with him to sketch a picture of his unprecedented career, the development of the Van Gaal phenomenon and the extraordinary man behind the much-discussed image.

This production is an initiative of Omroep MAX in coproduction with DOXY Films and was realized with the financial support of NPO-fonds, Netherlands Filmproduction Incentive and CoBO.

On April 14th Dutch FilmWorks will release the documentary in the Dutch cinemas.